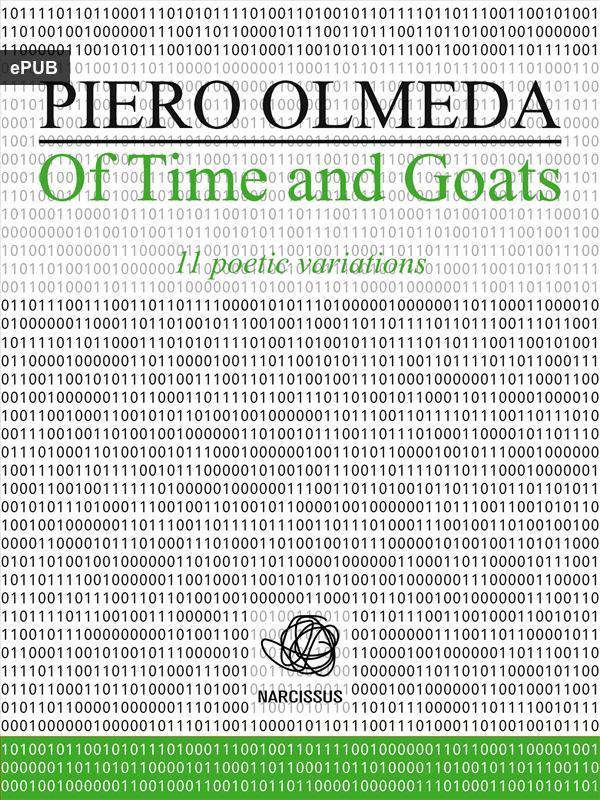 Of Time and Goats

11 variations on Time and Goats was written in one day long ago in 1987 with only the slightest modifications subsequently. Despite the fact that the variations were conceived without computerized assistance, they are clearly influenced by the poetics developed using poetry writing programs developed by the author himself: word associations that transcend common logic, neologisms, meter in continuous evolution, and an evident structure that is less a cage than a center from which a spiral issues uncontrollable forth.
The tragic tone set at the start slowly begins evolving in the directions of irony, grotesque, and nonsense with each new variation. As the reading continues, the poem becomes a twisted mirror that never reflects the image faithfully, leaving the viewer with such ample possibilities for interpretation that he or she thinks to have been the one that ascribes its meaning, not the poet.
The 11 variations were originally presented at poetry readings and read live by the author as part of his experiments in the use of the voice in poetry. Olmeda’s style has very little in common with Sound Poetry or the classic theatrical performance of poetry. Continuous changes in tone and pitch, the extension and contraction of the voice in time, and sudden stops all complement the structure of the variations in order to increase their power of communication. Listeners are no longer as concerned with meanings as they are absorbed in the sound of the words from this magic flute that makes them completely forget the significance of the poetry, the sense of performance, and the meaning of life.
Something that cannot be forgotten remains, however. As the poem shifts into its final variation, reality remains hidden in ambush behind the magic spell, the flute’s enchantment fades, the cobra sinks back down into the snake charmer’s basket, and the poet remains alone on stage for the final act.